A Tie That Means Something March 2018 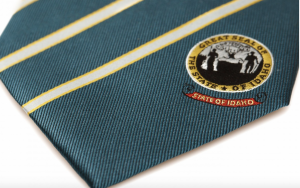 The men’s necktie retailer has sold thousands of ties across the country and is now gaining a foothold in brick and mortar locations. Statesman Ties Founder Rob Caldwell said, “Offering our Idaho ties at BYU-Idaho will allow students and faculty alike to share a common bond over their school. The partnership with BYU-Idaho will give people affiliated with BYU something tangible to remember their time at the school in Idaho. Also, knowing that many of the students at BYU-Idaho have served LDS missions – or know someone who has served a mission – there will be a classy keepsake available to help them remember where they served or where they are from.”

Statesman Ties continues to push the envelope with tie designs, offering a range of men’s neckties inspired by different states around the U.S. and countries around the world. Each tie pays homage to a specific location, and the designs are often influenced by state and country flags. The ties make a great gift for a loved one who served their mission in the corresponding state or country. All Statesman Ties can be personalized with a 21-character message if ordered through the website.

Statesman Ties was created by Rob Caldwell and his wife, Amy Caldwell. On his last day in the Ukraine, Kiev Mission, some the very thoughtful members of one of the local congregations sent Rob home with various gifts. One gift was a necktie with the same colors as the Ukraine flag.That is when Rob realized that not only loved the people of the Ukraine, but truly appreciated his time serving his mission there, so much so that he was grateful to have a tie that would always remind me of my time there: A tie that means something.

It was with that phrase in mind that Rob created Statesman Ties back in 2006. Statesman Ties uses the tagline “A Tie That Means Something,” because the custom neckties are more than just a fashion statement. They are a statement of pride and a unique way for a person to be reminded of a country or area they’ve served in as an LDS Missionary, or just a country that they are fond of and like to visit. All ties are guaranteed for life, if a Statesman necktie ever falls apart, rips, or is in any way defective, it will be replaced no questions asked.

About the Author: Legend Products