I was thinking today about some of the cool things that I did as a kid growing up in Utah. There were many different outdoor activities that my family and I did together. A lot of camping and hiking and taking advantage of the proximity to the beautiful Wasatch Mountains. Our family did a lot of the budget-friendly activities (read: free) and we camped in a tent a lot because my parents were happy being one with nature (read: camp grounds were a lot cheaper than hotels).

Having said that, I gained an early appreciation for the outdoors. It was fun to be outside and playing in the mountains or foothills by my home and jumping in rivers and catching snakes. One place we went a few times was Mount Timpanogos Cave. My Elementary school thought highly of Timpanogos Cave as well, so I remember going there on a field trip with all of my classmates from 3rd Grade. Looking back on it now, I’m sure that all teachers and parents involved were probably stressed-out of their minds trying to keep 60+ 9 year-olds away from the edge of a steep hiking path up the mountain. But, to their credit, no one died. That’s the goal right?…Get everyone back to the school without any deaths? Ha.

Anyway, one of my favorite memories of going to Timp Cave was seeing and touching the “Salt and Pepper” shakers deep within the cave. The story about how these stalagmites got their name – at least how it was told to me as a 9 year-old by our entertaining tour guide – was that they looked like salt and pepper shakers (that was an easy one Mr. Tour Guide) as well as tasted like salt and pepper too!

Now we were talking!

How did they actually taste like salt and pepper you ask? That was the same question I had in my mind at the time as well!

The tour guide didn’t tell us about the secret behind the taste at that moment. He did say that we could all touch and – if we were really brave and wanted to really find out if they tasted and good as they looked – lick the salt and pepper shaker too!

Wow. This was awesome! Only thing was, no one was really in the tasting mood that day. Except for my classmate James. James was the kid who couldn’t sit still. He was the one who had to sit on his hands all the time as an order from our teacher because he was always messing around with something or someone. He was always the one we’d dare to do something we all were too chicken to do (or simply smart enough to dare James to do it so we could live on the edge vicariously through him). We were sure that James would take a lick for us and really find out if what the tour guide was saying was true or not.

Well, we were right. Without much prodding, James went right up there, bent over and took a huge lick of the salt shaker. “Ewww. Gross; it does taste like salt!” He said.

Before we could all rush over there get in a taste for ourselves, the tour guide told us the answer to our question: While there are minerals in the water which form the stalagmites, it’s really the salt and oils from all the visitors’ hands that have touched the salt and pepper shakers that causes the heightened salty taste.

“Yuck! Ewww! Gross! Most of us shouted.” (That must have been the best part of the tour guides’ day!)

It was pretty funny. And I’m sure there were other kids who wanted to take their own lick as well that day, but I don’t remember if anyone else was allowed to. It was probably a good thing and, keeping kids from getting some sort of disease was probably on the minds of the teachers and parents as well.

Fast-forward 20 years and I’m taking my own kids to the cave. What a disappointment when I get to the salt and pepper shakers and there is a hand-rail/barrier there in front formations and no one is allowed to touch them! Oh well.

Probably for the best, right? 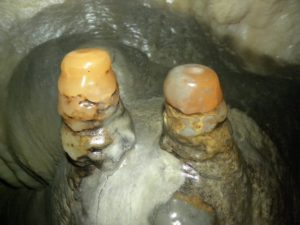 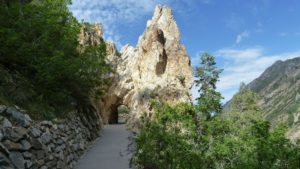 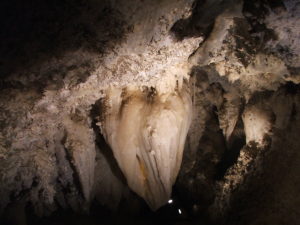 Heart of the Mountain

About the Author: Rob