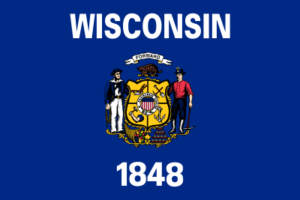 Statesman Ties Wisconsin Tie was designed to represent the flag of Wisconsin with the state shape.

A perfect gift for anyone with a special connection to the Badger State.

Statesman Ties Wisconsin Tie was designed to represent the flag of Wisconsin. The design takes elements from the Wisconsin flag and mixes them together with the easily recognizable shape of the state to create a tie that can be worn at any time for any occasion.

The flag of Wisconsin is the official flag of the U.S. state of Wisconsin. The flag was first adopted in 1863, and was modified in 1979. It is a blue flag charged with the state coat of arms of Wisconsin.

The flag of Wisconsin was adopted in 1863, following requests from Civil War regiments for battlefield use. The legislature formed a committee to choose the specifications for the flag, which was the state coat of arms centered on a field of dark blue. This design was similar to the ones in use by regiments. In 1913, it was formally added to the Wisconsin Statues, which specified the design of the state flag.

The Wisconsin Tie is a great gift for missionaries, businessmen, and anyone who loves Wisconsin.

You can even add a customized, embroidered tag to the back of the tie and make it very unique!

Be the first to review “Wisconsin Tie” Cancel reply