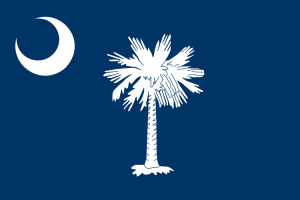 Some interesting facts about the flag of South Carolina:

“In 1775, Colonel William Moultrie was asked by the Revolutionary Council of Safety to design a flag for the South Carolina troops to use during the American Revolutionary War. Moultrie’s design had the blue of the militia’s uniforms and the crescent. It was first flown at Fort Johnson. This flag was flown in the defense of a new fortress on Sullivan’s Island, when Moultrie faced off against a British fleet that had not lost a battle in a century.

The palmetto was added in 1861, also a reference to Moultrie’s defense of Sullivan’s Island; the fortress he’d constructed had survived largely because the palmettos, laid over sand walls, were able to withstand British cannon.” (Source: here.)

The South Carolina tie is a great gift for missionaries, businessmen, and anyone who loves South Carolina.  You can even add a personalized embroidered message on the back of the tie that the wearer will be sure to love! We attach each tag on by hand. Our high quality South Carolina Tie is made with 100% woven silk and measures 61″ long x 3.25″ wide.

Be the first to review “South Carolina Tie” Cancel reply