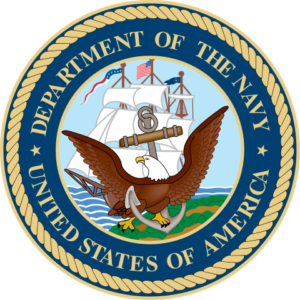 Statesman Ties US Navy Skinny Tie is based on the United States Navy Seal.

The Navy Skinny Tie is a perfect gift for anyone with a special connection to or a respect for those who have served in the Navy.

The United States Navy (USN) is the maritime service branch of the United States Armed Forces and one of the eight uniformed services of the United States. It is the largest and most powerful navy in the world, with the estimated tonnage of its active battle fleet alone exceeding the next 13 navies combined, including 11 U.S. allies or partner nations as of 2015.[7][8][9][10] It has the highest combined battle fleet tonnage[11][7](4,635,628 tonne as of 2019)[12] and the world’s largest aircraft carrier fleet, with eleven in service, two new carriers under construction, and five other carriers planned. With 336,978 personnel on active duty and 101,583 in the Ready Reserve, the U.S. Navy is the third largest of the U.S. military service branches in terms of personnel. It has 290 deployable combat vessels and more than 3,700 operational aircraft as of June 2019.[3]

The U.S. Navy traces its origins to the Continental Navy, which was established during the American Revolutionary War and was effectively disbanded as a separate entity shortly thereafter. After suffering significant loss of goods and personnel at the hands of the Barbary piratesfrom Algiers, the U.S. Congress passed the Naval Act of 1794 for the construction of six heavy frigates, the first ships of the U.S. Navy. The U.S. Navy played a major role in the American Civil War by blockading the Confederacy and seizing control of its rivers. It played the central role in the World War II defeat of Imperial Japan. The U.S. Navy emerged from World War II as the most powerful navy in the world. The 21st century U.S. Navy maintains a sizable global presence, deploying in strength in such areas as the Western Pacific, the Mediterranean, and the Indian Ocean. It is a blue-water navy with the ability to project force onto the littoral regions of the world, engage in forward deployments during peacetime and rapidly respond to regional crises, making it a frequent actor in U.S. foreign and military policy.

Be the first to review “US Navy Skinny Tie” Cancel reply