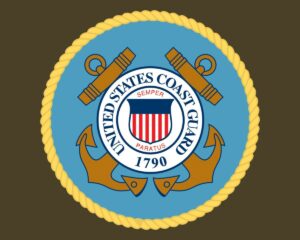 The Coast Guard Tie is a perfect gift for anyone with a special connection to or a respect for those who have served in the Coast Guard.

4 August 1790 – President George Washington signs the Tariff Act that authorizes the construction of ten vessels, referred to as “cutters,” to enforce federal tariff and trade laws and to prevent smuggling.  The Revenue Cutter Service expanded in size and responsibilities as the nation grew.

1915 – The Revenue Cutter Service merges with the U.S. Life-Saving Service, and is officially renamed the Coast Guard, making it the only maritime service dedicated to saving life at sea and enforcing the nation’s maritime laws.

1939 – President Franklin Roosevelt orders the transfer of the Lighthouse Service to the Coast Guard, putting it in charge of maritime navigation.

1967 – The Coast Guard is transferred to Department of Transportation.

2003 – The Coast Guard is again transferred, this time to the Department of Homeland Security, where it currently serves.

Be the first to review “US Coast Guard Tie” Cancel reply