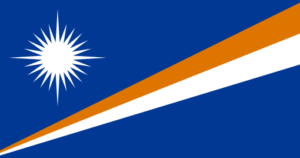 The flag of the Marshall Islands, an island nation in the Pacific, was adopted upon the start of self-government, May 1, 1979. The flag was designed by Emlain Kabua, who served as the first First Lady of the republic.

The Marshall Islands were part of the Trust Territory of the Pacific Islands administered by the United States, from which the Marshall Islands, Palau, and the Federated States of Micronesia split. In common with other island nations in the region, this flag features the symbolic representation of the islands’ place within the ocean. The rising diagonal band represents the equator, the star above representing this Northern Hemisphere archipelago. The white and orange portions of the band represent, respectively, the Ratak Chain (“sunrise”) and the Ralik Chain (“sunset”), as well as symbolizing peace and courage. The star’s 24 points represent the number of electoral districts, while the four elongated points represent the principal cultural centers of Majuro, Jaluit, Wotje and Ebeye. The flag is also the national flag with the most points on a star, at 24.