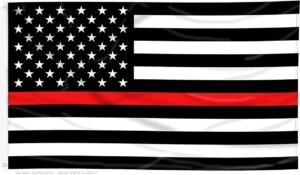 Statesman Ties FIRE Skinny Tie is based on the Thin RED Line.

The Fire Tie is a perfect gift for anyone with a special connection to or a respect for those who have served in the Fire Service.

The Fire Skinny Tie is based on the THIN RED LINE.

The phrase originated as an allusion to the British infantry regiment The Thin Red Line during the Crimean War in 1854, wherein the regiment of Scottish Highlanders—wearing red uniforms—famously held off a Russian cavalry charge. Its use referring specifically to the police was popularized by Los Angeles Police Chief Bill Parker during the 1950s; author and police officer Joseph Wambaugh in the 1970s, by which time “thin blue line” was used across the United States;[2] and Errol Morris‘s documentary The Thin Blue Line (1988).

Be the first to review “Fire Skinny Tie” Cancel reply