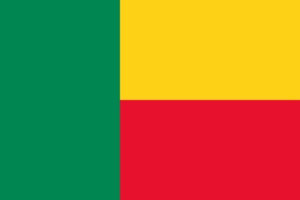 The Statesman Ties Benin Skinny Tie design was inspired by the flag of Benin. We took the main elements of the national flag of Benin and created a classy necktie.

A perfect gift for anyone with a special connection to Benin.

The Statesman Ties Benin Skinny Tie design was inspired by the flag of Benin.

The national flag of Benin[1] (French: drapeau du Bénin) is a flag consisting of two horizontal yellow and red bands on the fly side and a green vertical band at the hoist. Adopted in 1959 to replace the French Tricolour, it was the flag of the Republic of Dahomey until 1975, when the People’s Republic of Benin was established. The new regime renamed the country and changed the flag to a green field with a red star in the canton. This version was utilized until the regime collapsed in 1990, coinciding with the Revolutions of 1989. The new government promptly restored the original pre-1975 flag.

The Benin Skinny Tie is a great gift for missionaries, businessmen, and anyone who loves Benin.

Be the first to review “Benin Skinny Tie” Cancel reply