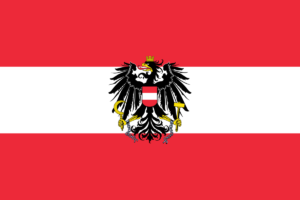 The Statesman Ties Austria Skinny Tie design was inspired by the flag of Austria. We took the main elements of the national flag of Austria and created a classy necktie.

A perfect gift for anyone with a special connection to Austria.

The Statesman Ties Austria Skinny Tie design was inspired by the flag of Austria.

The flag of Austria (Austrian German: Flagge Österreichs) is the flag of the nation of Austria. It consists of three bands of color in the following order: red, white, and red.

The Austrian flag is considered one of the oldest national symbols still in use by a modern country, with its first recorded use in 1230.[1] The Austrian triband originated from the arms of the Babenberg dynasty. As opposed to other flags, such as the black-and-yellow banner of the Habsburgs, the red-white-red flag was from very early on associated, not with a reigning family or monarch, but with the country itself.

In addition to serving as the flag of Austria since 1230, it was adopted as the naval ensigns and flags of the Grand Duchy of Tuscany and Duchy of Modena and Reggio in the 18th and 19th century respectively, as both were ruled by cadet branches of the House of Habsburg.

The Austria Skinny Tie is a great gift for missionaries, businessmen, and anyone who loves Austria.

Be the first to review “Austria Skinny Tie” Cancel reply