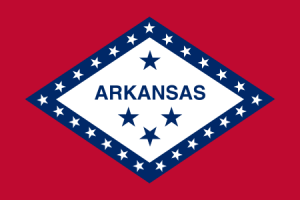 Statesman Tie’s Arkansas Skinny Tie was designed to represent the flag of Arkansas. There are four navy blue stripes in the tie that represent the four blue stars located in the diamond symbol on the flag.

Statesman Tie’s Arkansas Skinny Tie was designed to represent the flag of Arkansas. There are four navy blue stripes in the tie that represent the four blue stars located in the diamond symbol on the flag. The symbol in the corner is taken directly from the flag of the state of Arkansas. As well, we used red as the major color in the tie just like red is used as the major color in the flag in order to tie everything together.

Some interesting facts about the flag of Arkansas: “The flag’s elements have a complex symbolism. According to the 1987 state law defining the flag, the diamond represents Arkansas’ status as ‘the only diamond-bearing state in the Union’. (Crater of Diamonds State Park was the only diamond mine in North America at the time, before more recent discoveries in Colorado and Montana.) The number (25) of white stars around the border of the diamond represents Arkansas’ position as the 25th state to join the union. The blue star above ‘ARKANSAS’ represents the Confederate States of America, which Arkansas joined in secession. The design of the border around the white diamond evokes the saltire found on the Confederate battle flag.” (Source: here.)

The Arkansas Skinny Tie is a great gift for missionaries, businessmen, and anyone who loves Arkansas.

Our high quality Arkansas Skinny Tie is made with 100% woven silk and measures 61″ long x 2.5″ wide.

Be the first to review “Arkansas Skinny Tie” Cancel reply