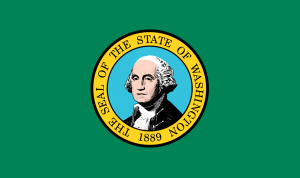 Statesman Tie’s Washington State tie was designed to represent the flag of Washington State. The state flag of Washington consists of the state seal, displaying an image of state namesake George Washington, on a field of dark green with gold fringe being optional. It is the only U.S. state flag with a field of green as well as the only state flag with the image of an American president. We wanted to honor these elements, so we included the image of George Washington in the corner of the tie along with green stripes from the main color of the flag and yellow stripes from the seal surrounding Washington’s head.

The Washington State tie is a great gift for missionaries, businessmen, and anyone who loves Washington State.  You can even add a personalized embroidered message on the back of the tie that the wearer will be sure to love! We sew each tag on by hand.

Be the first to review “Washington State” Cancel reply