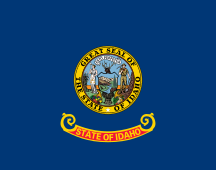 Statesman Tie’s Idaho tie was designed to represent the Idahoan Flag. The design takes elements from the Idahoan flag and mixes them together to create a tie that can be worn at any time for any occasion.

“The flag of the state of Idaho consists of the state seal on a field of blue. [The Great Seal was designed by Emma Edwards Green, the only woman to design a state seal.] The words “State of Idaho” appear in gold letters on a red and gold band below the seal.

The seal depicts a miner and a woman representing equality, liberty and justice. The symbols on the seal represent some of Idaho’s natural resources: mines, forests, farmland, and wildlife.” (Source: here)

When designing the tie, we used some of the colors from the seal for the stripes in the tie. The blue of the tie was used to create some variance in colors from the other blue ties that we have already designed, thus the different hue when compared to that of the flag. We also simplified the detailed seal so that it would be easier to weave into the tie.  Something a little different, but classy and something we think represents the state well.

The Idaho tie is a great gift for missionaries, businessmen, and anyone who loves Idaho.