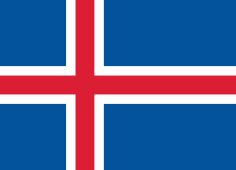 Statesman Tie’s Iceland Tie was designed based off of the flag of Iceland. We used the dark blue background of the flag as the base layer for our tie. Then, we positioned the Nordic cross near the bottom of the tie in one of the angled stripes.

“The modern flag dates from 1915, when a red cross was inserted into the white cross of the original flag. This cross represents Christianity. It was adopted and became the national flag when Iceland gained independence from Denmark in 1918. For the Icelandic people the flag’s colouring represents a vision of their country’s landscape. The colours stand for 3 of the elements that make up the island. Red is the fire produced by the island’s volcanoes, white recalls the ice and snow that covers Iceland, and blue is for the blueness of the mountains.” (Source, here.)

The Iceland tie is a great gift for missionaries, businessmen, and anyone who loves Iceland.