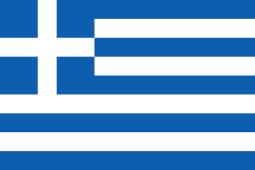 Statesman Tie’s Greece tie was designed to represent the Greek Flag. The design takes elements from the Greek flag and mixes them together to create a tie that can be worn at any time for any occasion.

“The national flag of Greece (popularly referred to as the “sky-blue-white” or the “blue-white” and in Greek: “Γαλανόλευκη” or “Κυανόλευκη”), officially recognized by Greece as one of its national symbols, is based on nine equal horizontal stripes of blue alternating with white. There is a blue canton in the upper hoist-side corner bearing a white cross; the cross symbolizes Eastern Orthodox Christianity, the established religion of the Greek people of Greece and Cyprus.” (Source: here)

We decided to use the blue and white stripes from the flag to be the basis for the Greece tie. The blue canton is very symbolic as well as the full flag itself, so we incorporated that into one stripe by itself. Something simple, yet poignant and classy.

The Greece tie is a great gift for missionaries, businessmen, and anyone who loves Greece.